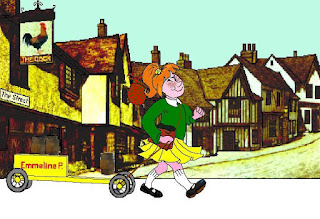 Moi Name’s Jenno
‘Allo ev’rybody…! Moi name’s Jenno; leastways, that’s wot most o’ moi friends call me, so Oi reckon as ‘ow yew can call me that an’ all.
Actually, moi name is Jean Bryce. Moi mum calls me Jeanie, ‘cept when she calls me “Jean”. But cripes, when she does that, Oi gotta look out, ‘cos it means she’s real cross wiv me.
Oi live in a village in called Widdlington. It’s quite a big village taken all-together, only it’s cut inter two parts by a river an’ a railway going through the middle. Each part ‘as got its gangs. The part, wot we call “The Street” is real old. It were started by the Vikings about 1200 years ago. It’s got two gangs. The new part, wot is where Oi live, were mostly built along when the railway came. It’s got two gangs an’ all.
Each gang ‘as got a territ’ry, an’ nobody ‘ad better go alone inter the territ’ry of anovver gang, ‘cos that’s jus’ plain askin’ fer trouble. Oi’m talkin’ about the kids, o’corse, ‘cos the grown-ups ‘ave got ovver sorts o’ gangs, wot ‘ave ter do wiv political parties, or sport, or religion an’ such stuff, wot ain’t really moi cup o’ tea. They argue a lot about all that, but they don’t much notice the kids’ gangs unless there’s a bit of a barney goin’ on, an’ even then they don’t properly unnerstan’ wot it’s all about. Grown-ups often ferget real quick wot it’s loike ter be a kid. 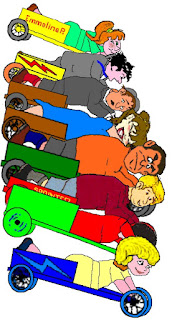 A lot o’ the barneys us kids ‘ave, start because of our soapbox carts. The fing is, most of the kids, includin’ the girls, loike ter race’ their carts down the Mountain Glide, wot is an old gravel pit. There we sometoimes ‘ave races between the gangs, wot don’t always go real amicably (cripes, there’s a super word fer yew!). Moi cart is real fast. She’s called “Emmeline P” because of Mrs Emmeline Pankhurst the famous suffragette, wot got votes fer women. Fact is, Oi don’t reckon as ‘ow there ain’t nobody more famous than wot she is, ‘cos she didn’t never give up, not even when fings looked real bad against ‘er.
Any’ow, there’s lots o’ problems between the kids o’ the village a-cause o’ cart racin’, an’ ovver fings as well. If’n yew’d loike ter know more about ‘em, p’raps it’d be best ter take a dekko at Peter St John’s “Gang” books, wot ‘ave got quite a lot about me in ‘em an’ all.
Speakin’ o’ super words, there’s real scads of ‘em in the diction’ry, and Oi like ter trot one out now an’ again, jus’ fer fun. The fact is, (only please don’t let on ter nobody) Oi c’n write real posh if’n Oi set moi mind ter it, loike at school. Oi don’t do it wiv moi friends, ‘cos if’n Oi did, they’d reckon as ‘ow Oi were a-showin’ off – an’ then Oi’d get dropped faster’n yew c’n say “elegant elocution”. Besides, Oi’d loike ter count yew as bein’ among moi friends. See wot Oi mean?
Well, Oi reckon as ‘ow that’s probably enough from me fer the toime bein’. If’n yew’d loike ter learn more, yew could always go ter http://www.peterstjohn.net/ an’ do some clickin’ around, but only if’n yew really want to, ‘cos P St J writes posh, not proper English loike wot Oi do.
So cheerio fer now. P’raps Oi’ll see yew again later on. Meanwhile,‘Ave yerselves some ‘appy readin’…

Oi reckon as ‘ow most people know the old rhyme about a haughty fellow wot got ‘imself up on an ‘igh wall, an’ then fell down cos ‘ee got real dizzy wiv ‘imself. Any’ow, fer some reason, P St J felt as ‘ow ‘ee ought ter bring the rhyme up ter date a bit. So ‘ere it is, wiv a picture an’ all. Oi ‘ope yew loike it: 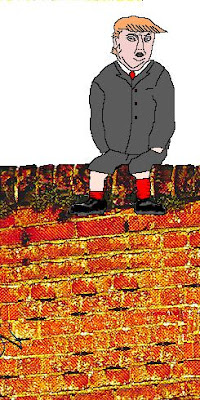 Humpty Trumpty
Hail temporal lord of lofty walls,
Gold-yellow crowned in splendour.
Come uply up from towering halls,
Hugely up—not to offend a member of the female gender—
But make us great, where all was small before,
And scorn the lore of those who keep the law.


But some know well that treacherous winds may bigly blow
Despite terrific speeches and all show. They know
Of weakness in a wall that shakes
And twitter-topple he who takes
Amazing stance upon the height.
To downward plunge in awesome flight.


For higher rise brings greater fall
The loftiest wall the worst of all.
A mighty crash upon the ground.
And then discordant trumpets sound.
For all the force and all the men
Cannot lift golden Lord again.