Moi fav'rite book, wot's called "Gang Loyalty, 'as a lot in it about the English game o' cricket. P'raps there's some people readin' this, 'specially them wot live in , wot ain't never played cricket so Oi thought Oi tell yew all about it 'ere. The trouble is, that cricket's easier ter play than wot it is ter describe.


O' corse, all British boys are born knowin' all there is ter know about cricket. Fer girls it's different; they 'ave ter nut it out fer themselves. That's one reason wot accounts fer girls bein' so much more intelligent than boys.


Any'ow, cricket is a bat an' ball game wot is played between two teams of eleven people, (wot is called a "side"). One side 'as a bat, an' the ovver side 'as a ball. Only yew can play wiv fewer than eleven, loike wot we often do, 'cos it ain't always easy ter get tergevver eleven kids wot want ter play. The game is usually played on grass, 'cept that, in the schoolyard, it's on gravely dirt, 'cos there ain't no grass, except along the edge of the wall, 'cos the caretaker ain't got no toime ter spare ter go pulling the grass out. 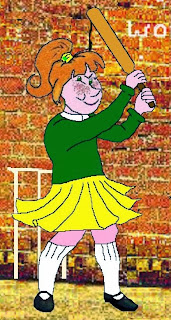 The place where it's played is called the "Field" wot strictly speakin' ain't correct, 'cos a field is wot gets ploughed up, wot ain't cricket fer cricket, if'n yew get moi meanin'. Any'ow, in the middle o' this "field" yew knock in three sticks quite close ter one-anuvver, wot are called stumps, only they ain't really stumps 'cos they're quite long, about up ter yer waist. An' then, at the distance of a "chain" (wot is in case yew don't know) yew knock in three ovver stumps. Only when we play, it ain't , 'cos that's a bit long, 'specially fer the little-uns, so we usually judge it by eye; about say. Not only that, if'n it's in the schoolyard an' it's too long, the ovver kids, wot ain't playin', often run across between the stumps, wot ain't good fer the concentration o' the players.


When yew've got yer three stumps set up, it's called a "wicket". On top of the three stumps yew put two short sticks called "bails". Actually, it's them wot ought ter be called stumps, 'cos they're real short an' stumpy. Only they're called bails. They're there so's yew c'n tell when the


wicket 'as been 'it by the ball, 'cos then they fall off. Only we don't 'ardly never play wiv the bails on, 'cos they're a bit fiddly, an' always get lost. Besides the wind blows 'em off an' all, specially fer the girls, wiv their skirts. An' all that ain't got nuffink ter do wiv bein' bailed out.


Any'ow, the team wot 'as the bat, puts a man in front of each wicket wiv a bat. Yeah, that person is still called a "man", even if'n it's a girl. Talk about discrimination! That there "man" 'as ter stand between the wicket an' a mark on the ground just in front of the wicket, wot's called the "crease". While, 'ee or she is in that little space, they're safe, an' can't be got out. Their job is ter defend the wicket, an' prevent it from bein' hit by the ball wot the ovver team 'as.


P'raps Oi oughtta explain, than when we play, there ain't but one wicket, 'cos wiv just a few of us, ev'rybody plays just against the one wot 'as got the bat— get it? An instead o' the ovver wicket, we put in only one stump, or even just a gas-mask box, ter mark the place. 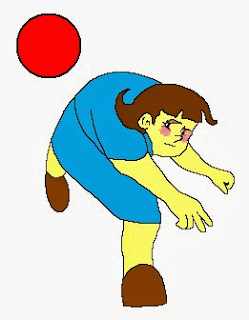 The side wot 'as got the ball, 'as the job o' sendin' it down from the ovver wicket (or gas-mask box accordin' ter circumstances) towards the one wiv the bat. That's called a "delivery". Only yew can't deliver the ball any ol' way wot yew loike; yew've got ter "bowl" it, or it don't count. Bowlin' means that yew got ter deliver the ball wiv a straight arm that goes over yer 'ead by the ear. If'n yew jus' throw it, it's called "chuckin'", an' the umpire calls "no ball". Only we don't never 'ave no umpire, wot can lead ter disputatious argument, wot ain't cricket. Any'ow, the one wiv the bat c'n still score off a no ball, even if'n 'ee can't be bowled out wiv one.


The batsman or batswoman (wot ain't never called a "batter" by the way) c'n score by 'ittin' the ball, an' then runnin' as far as the ovver wicket (or gas-mask box), wot counts one run. If'n the ovver team gets ter the ball an throws it back ter 'it the wicket while the batswoman is between the crease an' the ovver wicket, then they're out, an' someone else c'n 'ave a go at battin'. They're also out if'n the ball wot the batsman 'its, is caught afore it 'its the ground. Oi 'ope that's clear. 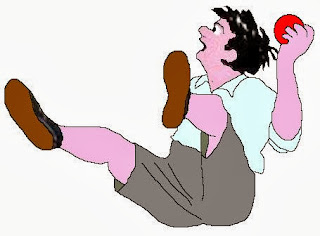 There's also some special scorin'. If the batsman (or woman) 'it's the ball ter the edge o' the "field" it's called a "boundary" an' counts four runs, but nobody 'as ter run, 'cept the person wot 'as ter go an' fetch the ball. If'n the ball goes ter the edge of the field afore it touches the ground, it counts six runs. O' corse, that don't 'appen very often.


When we play in the schoolyard, there ain't no "field", properly speakin', but it counts as a boundary, if'n the ball goes as far as the wall. A six-'it, is a ball wot goes over the wall, loike inter the infants' schoolyard. But yew 'ave ter watch out 'ittin' inter the infants' yard, 'cos if'n it 'it's one o' the little-uns an' they make a fuss, yew c'n get clobbered by the 'eadteacher. Some o' the infants are liable ter make a fuss even if'n the ball don't go anywhere near 'em, 'cos that way they c'n get get sweets fer keepin' quiet; the little devils. So it's best not ter 'it any balls in that direction.


So that's about all there is ter know about the essentials o' cricket. There's lotsa ovver rules natch, loike 'ow yew play when the wicket is chalked on the wall, but Oi reckon 'as 'ow Oi'v already covered the main points. If'n it ain't clear, yew c'n allus ask me fer details, or go ter any British boy; they're born wiv it, loike Oi said; even moi daft bruvver…


Sometimes the day begins wiv a clear mornin', an' be'ind all them little indoor sounds of life startin' up, it's all kind of quiet outside; loike when there's snow. That's when Oi reckon as 'ow it's a good toime ter  get a-hold o' the deep silence wot is be'ind all them little mischievous interferin' sounds o' livin'. 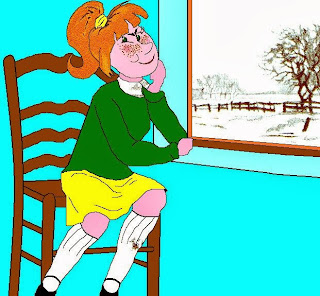 
When Oi'm in that place, Oi don't weigh nuffink; an' that's real relaxin' loike. When Oi'm in that place, Oi c'n know, wivvout really finkin' about it, wot a 'wunnerful creative sort o' fing Oi really am, 'cos Oi c'n touch ev'ryfink wot is, jus' by lookin' out from be'ind moi eyes. An' then Oi know that livin' is somefink wot is full of energy. An' when Oi know that, then evr'yfink starts lookin' new, jus' loike as though Oi were seein' it fer the very first toime; 'cept that it ain't the first toime, an' that makes it even better.


Cripes, then Oi know that Oi'm special, jus' loike wot everybody an' ev'ryfink else is Yeah, ev'ryfink's special. Yew too; real special…
Posted by Jenno at 02:58 2 comments: