John Jay is moi gang leader, only nobody don't never ever call 'im John, 'cept 'is mum when 'ee's at 'ome, an' that don't count. Ev'rybody else calls 'im J.J. even the teachers at school, 'cos if'n they jus' called 'im Jay… well it sounds a bit odd don't it, 'specially when yew fink of that stuff wot they use fer cleaning the toilets wot is called "J's fluid". It makes us laugh, wot ain't good fer discipline.


Loike Oi said, J.J. is moi gang leader, wot is called the Pepper Mill Lane Mob, 'cos that's where all the mob's members live, includin' me. There's ovver places in moi village of Widdlin'ton, but them wot live there can't be belong ter the Mob, 'cos yew got ter live along the Lane or yew can't be in it.


It ain't loike Peter's gang. The bottom of Peter's back garden ajoins (cripes, OI loike that word) the top o' moi yard where the chicken run is, only Oi ain't supposed ter talk wiv 'im across the fence 'cos fraternisin' wiv over gangs ain't allowed 'cept in neutral places loike the school; wot don't stop us talkin', only we 'ave ter be careful that nobody don't see us. Peter's gang is called the Lions Avenue Lot, wot 'as some members wot don't live along the avenue. Dunno why really, 'cept that the Lot let girls in as full members, an' some o' the village gangs don't let any girls in 'em at all. That makes fer problems: Cripes, don't it 'alf…! 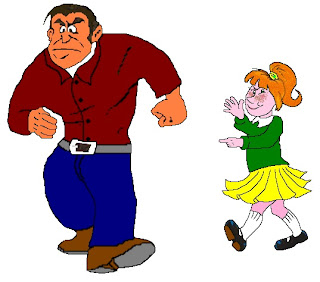 Any'ow, Oi'm gettin' off the subject. J.J. is real big, an' 'ee's real old, 'cos 'ee'll be eighteen on 'is next birfday. 'Ee's got a dog called Satan, an' 'ee treats girls, leastways, girls loike me, as though they was dirt 'cos 'ee don't allow us ter be full members of the Mob. The boys keep all the best stuff fer themselves, an' they 'ave secrets wot they don't share wiv us. So yew c'n see that J.J.an' me, we don't really see fings eye ter eye as it were.


That's about all there is ter say about J.J. 'cept that 'ee gave Peter a black eye one noight in the blackout. There's some, even Peter 'imself, wot says it were an accident, but Oi ain't never been real sure. Still an' all, that started a roight war in Widdlin'ton, when Peter's aunt went fer Mrs Jay, callin' 'er an irresponsible 'arridan, an' J.J. a mongrel loike wot 'is dog is. Well yew c'n imagine! It took 'Itler 'imself ter sort that one out, an' J.J. ain't the kind that c'd 'elp none, well not until 'ee gets called up inter the army, that is…


Oi ain't a-goin' ter tell yew the whole 'ist'ry 'ere, 'cos it 'ad important consequences. If'n yew want more, yew c'd take a look at http://www.peterstjohn.net/index_3.htm or better still, read the book. Yeah, there's even a whole series of books about it, an' Oi'm in 'em as well as J.J. an' the rest o' the gangs…


Till next toime, luv from Jenno.
Posted by Jenno at 07:56 No comments: