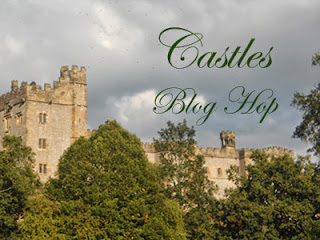 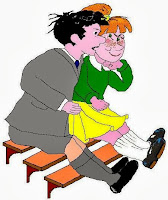 Leighton Buzzard ain't a real big place. Leastways, that's wot Peter says, 'cos Oi ain't never been there. But it ain't all that small neither, 'cos its got an animal market, an abattoir fer pigs, an' the at the bottom of the High Street. Oi know all that 'cos Peter 'as seen 'em.


Did yew know that Peter, wot come ter moi village o' Widdlin'ton in October 1940, is an evacuee? Well cripes, 'ee is, 'cos the orphanage in London where 'ee were when the war broke out, got 'it by a bomb. 'Ee don't loike much ter tell about it, but 'ee told me, 'cos the garden of 'is 'ouse backs on ter mine, down where the chickens are. That's where we talk; only don't tell nobody, 'cos it's secret, see.

After the bomb, all them kids wot were in the orphanage, 'cept fer them wot was killed or injured, lived first-off in a convent wiv some nuns. But nuns an' kids are loike coffee an' bananas; they don't mix too good tergevver. So they was soon sent off as evacuees ter different places. Peter was sent off loike a parcel, in the guard's van of a train ter Leighton Buzzard. 'Ee 'ad a label tied around 'is neck addressed ter the Billetin' Officer, an' 'ee 'ad a paper bag wiv a bun an' 'alf a bar o' chocolate. 'Ee didn't 'ave no ovver luggage ter speak of, 'cept a three-legged piggy bank wiv tuppence in it, an' a pocket knife wiv a slightly bent blade.


In the guard's van of the train were a whole lot of ovver parcels, though 'ee were the only one wot 'ad legs. Any'ow, 'ee tried ter straighten the blade of 'is knife in a crack in one the parcels, but the guard weren't too 'appy about that, an' stopped 'im. So the blade stayed bent.


There was a real lot o' confusion most ev'rywhere because of the war, an' when 'ee got ter Leighton Buzzard, nobody didn't really know wot ter do wiv 'im at first. So 'ee ate 'is bun an' chocolate, afore sleepin' the night on a bench in the station waitin' room. The next mornin', nobody still didn't come fer 'im, so 'ee broke the piggy bank an' bought a sandwich fer 'is breakfast at the station buffet.

Then the Billetin' Oficer, come fer 'im. She were a short lady, wiv a short temper. Peter reckons as 'ow she were a bit short on a few ovver fings an' all. Any'ow, she shoved 'im, temp'ry loike, in the 'ouse of a couple of real old people of about forty-five. They was all roight, but their 'ouse backed on ter the abattoir fer pigs, an' the squealin' wot went on from there were somefink terrible. From the upstairs winder, Peter could see wot was goin' on. It certainly weren't all roight. 'Ee still don't loike ter talk about it


Any'ow, the next day, the short, short lady come round fer 'im, an' off they went ter the Town Hall wot were at the top end of the market place. It were market day fer animals, an' the pens were full o' sheep, an' cows, an' pigs, an' such. Peter went over ter 'ave a look.


There were a pen wiv lots o' pigs in it. The fact is, it were so full o' pigs, that yew couldn't of got anuvver one in if'n yew tried, not even a little'un; not even wiv a shoe'orn. There was some men looking at the pigs an' a-pokin' at 'em wiv sticks. The pigs was so tight squeezed in that they couldn't move away. They jus' squealed. The men laughed. Peter were standin' there, all morose loike, by the gate of the pen, near the latch. 'Ee reckoned as 'ow 'ee could straigten the blade of 'is pocket knife by workin' it gently under the latch. So 'ee got the knife out, opened it, an' pushed it under the latch. Wot 'ee didn't expect were that the latch would spring open, an' wiv it, the gate. That's wot 'ee makes out, any'ow.


Well, them pigs didn't wait ter be asked twice, they jus rushed out o' there, like as 'ow they were were the Gadarine swine wot Jesus put all them demons into. But they didn't jump over no cliff, loike in Saint Marks Gospel, 'cos there weren't one. They jus' went rushin' down through the market towards the canal, knockin' people over, an' upsettin' the stands.


Peter didn't stay much longer in Leighton Buzzard after that. They put 'im on a train goin' ter Launceston, an' yew can't get much further away from Leighton Buzzard than that wivvout fallin' inter the Atlantic ocean. P'raps they 'oped 'ee'd go over the cliff loike them pigs in the Bible.


Peter ain't never told me wot 'ee done in Launceston; 'ee didn't jump over no cliff any'ow. 'Ee got evacuated ter Widdlinton in the finish, wot is a real long way from Launceston. Hmm, Oi ain't never thought of that before…

PS. Peter says as 'ow there's a real noice castle at Launceston up on a steep 'ill. Oi didn't say nuffink about it before 'cos it don't roightly fit inter the story. But Debbie Brown an the English History Fiction Authors http://www.linkytools.com/basic_linky_include.aspx?id=210634 'ave got a fing about castles, an' so Oi jus' thought yew'd loike ter know…
Posted by Jenno at 00:13 10 comments: 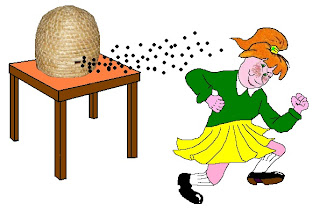 
A beekeepin' lady from Leigh
Got stung by a bee on the knee.
As she ran from the hive,
She cried: "I’ve to survive;
No more 'oney fer me!"


'Ave yew ever been stung by a bee? It ain't never 'appened ter me yet, an' Oi 'ope it never won't, 'cos Oi loike bees, 'specially them 'airy-bumbly ones, an' Oi loike 'oney an' all.


Bees ain't loike wasps, 'cos Oi've been stung several toimes by wasps. But they're diff'rent 'cos, not loike bees, they come around when yew're eating, an' try ter pinch bits o' food when yew ain't lookin'. If'n yew flap at 'em, they don't take the 'int an' go away. Mostly they seem ter call up reinforcements, an' it's usually then that yew c'n get stung. 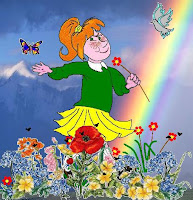 Any'ow, it weren't moi intention ter talk about wasps 'cos there's plenty of 'em around, an' they go a-scavengin' not pollinatin'. It's the bees wot worry me 'cos, 'ave yew noticed, there don't seem ter be so many of 'em around these days. Fewer bees, means less 'oney, an' it also means that there c'd be less of ev'ryfink, 'cos flowers need the bees ter pollinate 'em, ovverwise they don't give no fruit an' seeds wot we eat.


There seem ter be fewer flowers around an' all, 'cos there are fewer meadows. Meadows are more an' more plowed up ter grow vegetables an' stuff, but clover's all roight an' ovver kinds o' flowers too, 'cos bees loike flowers. P'raps that's why Oi sometimes get follered by bees. They probably see me as a walkin' sunflower or somefink. 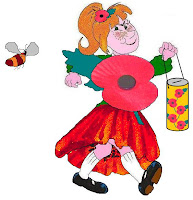 Well, there was that toime when Oi were wearin' moi poppy costume ter collect fer the Earl Haig Fund, an' Oi got follered fer ages by a big bumble-bee. That were real strange 'cos November ain't the toime fer bees ter be about. Wasps neither, fer that matter.


Any'ow, wot Oi wanted ter say is: keep a lookout fer the bees, it's important. An' don't get stung.