Jus' recently a poem, wot were writ by PStJ, got mentioned on Facebook. It's a weird sort o' poem, an' it's a bit long, but it seems as 'ow some people reckon it's okay. If'n yew don't loike it there's no need ter go a-blamin' me, 'cos there ain't no accountin' fer stuff wot ovver people write. Any'ow 'ere it is:


No time for dreams – the time is now.
Eternal now that cannot change.
A frozen moment – yet somehow
The sun moves on, familiar, strange.


In windy silence, tempest calm,
The trees stand still and shout their lives.
Around is light without alarm
And fearful joyfulness survives.


In symbiotic freedom fixed.
Together linked and yet apart
All individually mixed
Alone together, end and start.


The ploughman, on his tractor, dreams
Of half-past-five and then his beer.
The gulls wheel round and each one seems
A feasting, feathered buccaneer.


Competing, squabbling, hovering still
While swooping in the static breeze.
They scream aloud with silent bill
And gleam between the glowing trees.


As one they dive – all aerobatic
Around the furrowing ploughman go.
A single creature singly static
So swiftly swirling and so slow.


Then time itself takes up the theme
To tune its beat to ever now
And harmonize the ploughman's dream.
Plough on, plough on and ever plough.


Time's furrow on the ploughman's brow
Is no more than a seagull's care
To furrow, burrow, know not how,
While time stands still on windy air.


For time is wind and tree and bird
And ploughman dreaming of his beer
And seagull's scheming dreaming heard,
And hope and love and screeching fear.


With screaming seagulls, gleaming trees
And dreaming ploughman in the sun.
All time stands still – its vortices
Together flow and make all one.


That battered tractor, rattling wreck–
While breaking up a ploughman's dream
And shaking up the ploughman's neck–
Is scarce a chariot supreme.


Through integrality's one eye
Is seen the tractor's elegance.
It's like a cunning jewellery
All sparkling in its radiance.


For each translucent element
In fine and stately motion, weaves
A linked and wondrous complement
Where each the other's dance achieves.


Each dancing part proclaims a name
And where it came from, each one knows.
See each component part aflame;
Transforming fire on substance pose.


So glance around – no need to look
Where they from eggs the seagulls hatched.
The ploughman's life an open book
With all the details finely matched.


Each seagull sees a squirming worm
Go worming through the teeming earth.
And teeming, scheming with the germ
Of ever-living, endless birth


And death; in life's great library
Where every word, unchangeable,
Is fixed and evolutionary
In language clear, ineffable.


And there beyond Andromeda
Unseen, the stars revolve and fade.
There see, celestial space joy-rider,
On time's eternal path remade.


One finite leap to boundless space.
Where every book on every shelf
Is known to those who know the grace –
The secret key to time and self.


One transcendental ‘now’, astride
All individual competence
That brings awareness qualified
For complete being; deep, intense.


For all is known and clear as glass.
And all revealed and nothing hid.
For all is linked, no thing can pass
A coherence so clear, limpid.


Time flowing not – yet ever there.
Time ploughing on and furrowing.
Time for a dream – to be aware.
Time dreaming on a seagull's wing.


All clocks converge, their treacly ticks
Suspend the bubbles in the beer.
It's half-past five – or is it six?
Is ‘now’ far off, or is it near? 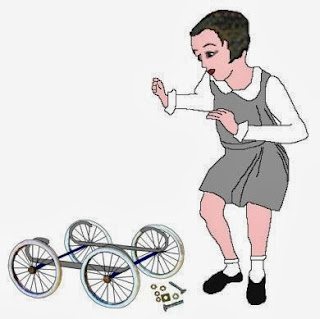 It ain't very difficult ter make a soap-box cart, provided yew've got a box an' some good wheels. The best kind 'ave got ball-bearings rather than ordin'ry plain bearings. Yew c'n sometimes get 'em off'n an old perambulator (Wot a lovely word! But Oi fink that in it's wot they call a "baby carriage"). The underneath part is loke wot Molly 'as in the picture 'ere. My own cart, "Emmeline P", 'as got pram wheels too, wot come off my perambulator after my daft bruvver let it roll down the steps in front of ol' farmer Catchpole's tractor… The wheels were still okay though.


Moi cart is named after that there Mrs Emmeline Pankhurst, wot chained 'erself ter railin's an' went ter prison, an' all, so's women c'd get ter vote in England. A right great lady she were, even though she weren't very big; loike me. She's got 'er statue in a little park roight by the railin's o' Parliament 'Ouse, near that woppin' great clock wot they call Big Ben, though roightly speakin' it's the bell wot sounds the hour wot is really Big Ben. Any'ow, moi cart's called Emmeline P; loike yew c'n see in the picture 'ere, an' nat’rally, it's the fastest cart in Widdlin'ton, even if it's me wot says so. 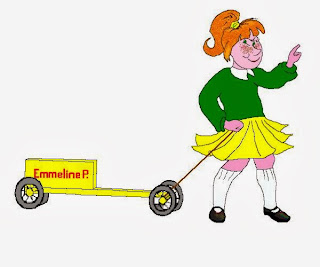 O' corse, yew're also goin' ter need a good wooden soap-box. Yew used ter be able ter get one from the local store; they were only too glad ter be rid of 'em. It's probably a bit 'arder ter get one these days, wot wiv the war, an' crises, an' modern packagin', an' all that sorta fing. Still an' all, yew c'n always make a box out of a plank or two; in which case, it's a good idea ter use somefink a bit thinker, 'cos, when all's said an' done, them usual soap-boxes are just a bit flimsy. They don't stay tergevver so well if yer cart 'appens ter turn over; wot ain't so rare.

A real important part of the cart, the long plank wot 'olds everyfink tergevver, is wot we call the "Spine". That's gotta be real thick, three-quarters of an inch at least. If it's any thinner, it'll be all springy, loike wot them big American cars are, an' then yew c'n get kinda seasick when it bounces up an' down over the bumps. Besides, it's gotta be solid enough ter take the 'ole at the front fer the steerin' bolt. If'n it's too thin, yew'll lose the front axle the very first toime yew ride down over a curbstone. See wot Oi mean?


When Peter an me made moi Emmeline P, Oi come along wiv a tin full o' nails, only Peter said that nails weren't no good fer makin' carts. Yew 'ave ter screw 'em, or better still, bolt 'em tergevver, 'cos nails work loose pretty quick. Oi pass the tip on. Yew don' 'ave ter thank me fer it, 'cos Oi didn't know it either at the toime. The best sort o' bolts, are them wiv a little square under the ‘ead. They call 'em "coach" bolts. Yew need ter fix 'em wiv a washer under the nut, ovverwise it 'urts the wood, an' then they come loose as quick as yew c'n say Hill.


If'n yew use screws ter fix the box ter the spine, then it's best ter put some glue on as well. Then it won't never come apart. The wheels, complete wiv axle, yew c'n fix underneath wiv "U" bolts. Oi reckon as 'ow Oi don't 'ave ter describe wot a "U" bolt is, 'cos it looks exactly loike wot it's called. An' words that'd be useful fer everyfink, don't yew reckon?


One last fing: If'n yew can, troi ter get a real, proper, bushed pivot bolt ter fix the steerin' bar wiv. It'll give yer cart a roight solid directional (Oi loike that word!) feel. It c'n give yew a worfwhile advantage (yeah— an even better word!) in a pushed start, or in an emergency. Besides, it don't work loose, neither.