A Soft Thump from the Nave


Oi ain't posted nuffink fer while, so ter try ter make up fer it, 'ere's somefink wot is a bit longer'n usual. It's fer 'Alloween, so it's just a bit creepy. It's moi friend Peter wot tells the story. Ter win a bet wiv sneaky, sly Selena, 'ee 'ad ter sneak out o' bed an' then go inter the church at night wivvout shinin' 'is torch. This is 'ow it were. Oi 'ope yew loike it...

A Soft Thump from the Nave

My senses were on full alert, but there was nothing to sense other than the mysterious noises of the countryside, the breathy night air, and the shifting moonlit sky. No house showed the smallest glimmer of light: the occupants were either in bed or their blackout was well in place.
I reached Gables Corner without mishap. An owl screeched. I jumped and then shivered. Owls are a bad omen.
Nothing was stirring down the dark road; but was Mr Trundle on guard duty by his house or on the high station platform? I turned myself into a spectre of the night and glided ahead with precaution, ready to freeze or flee at the slightest alarm.
From the deep blackness under the railway bridge I scanned the road across the river meadows to the footbridge. Could someone be lurking in the shifting shadows of the hedge? Of course not, I reassured myself. But I should keep to the shadows myself to avoid being seen.
I slid silently along to the footbridge over the river, and crouched in the uncertain shelter of the parapet. The river gurgled ominously below.
The church spire was close now. It lanced through the torn clouds and stabbed awake my unavowed apprehension. I would soon have to go under its fang into the funereal graveyard. 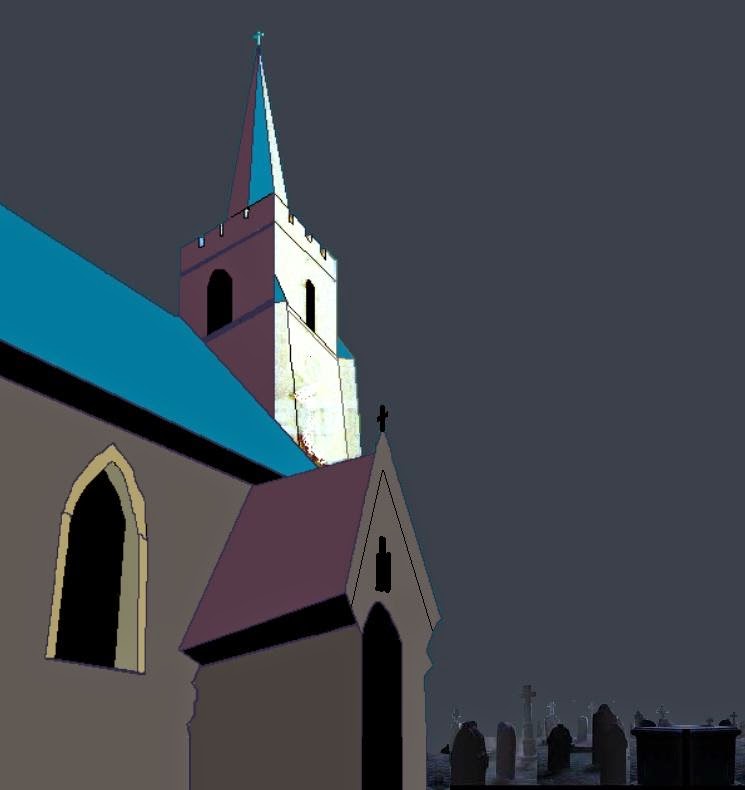 I began to regret my incautious boasting to Selena. Perhaps the shades of those buried there really do slither at night from their ghastly tombs in the lurking loom of moonlight. Even so, I couldn't back down now.
I gathered my wavering resolution and tiptoed to the graveyard's lych gate. It was nearly invisible in the sombre shadow of two huge guardian yew trees. I must pass through the inky void between them. Should I run?
The lych gate was closed. I crouched by it trying to still the deafening tom-tom of my heartbeat. Every woeful wraith beneath every baleful tombstone must hear it.
I reached for the handle of the gate. My hand shook. The latch flew up with a clack to waken the dead. I trembled, but could not advance. The emptiness between the yew trees was an evil, black barrier.
God lived in the church, I told myself. God was my father. He loved me. I'd be safe in there.
This comforting thought got me through the gate, and I sprinted for the porch. Gravel scattered from my feet to deter the waiting wraiths. The porch engulfed me in its gloom. I clutched a pillar of the inner door and hugged it, panting. Nothing had got me— yet. But they were waiting— just waiting—
I slipped inside the inner door and leaned against it. The church was cool, and quiet, and dark, and— spooky. My heart hammered. No—I tried to reassure myself—this was my father's house. I was safe in here. The trouble was— I didn't feel safe; not safe at all. I felt terrifyingly alone. I didn't want to stay. So please— help me, God!
Exactly how I did it, I don't know. I made no specific resolution to defy the demons. I began to walk slowly and deliberately to the centre aisle and then up to the chancel. There was just enough light from the moon flickering through the windows, to see my way between the black rows of pews. 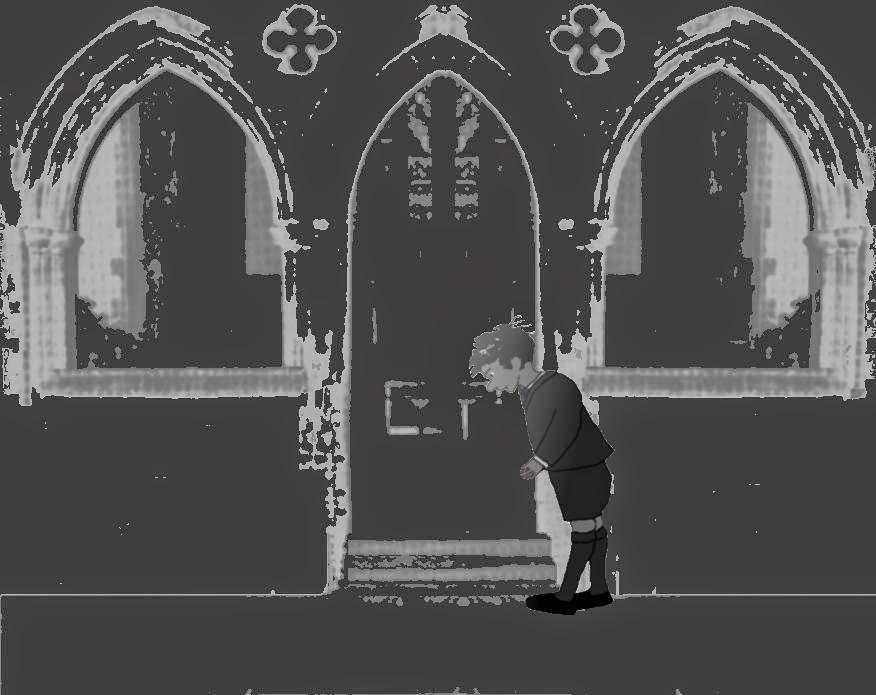 I felt my way up the three chancel steps. The familiar choir stalls gave some slight protection from the terrors of the dark. I collapsed, trembling, into Selena's seat, and listened intently.
My thumping heart covered all other noise. I must find Selena's envelope and get out of here as fast as possible. Fearfully, I switched on my torch and found the hymn book. Surprise: there were two envelopes inside. One of them was marked, ‘Selena’; the other bore my name. I stuffed them into my pocket and prepared to flee.
There came a soft thump from the nave.
I switched off my torch and cowered, terrified, in my seat. My ears, like huge alert saucers, turned towards the sound. I heard a stealthy, horrifying shuffling. I became an icy block. I stopped breathing. The shuffling came closer. My heart stopped. Something awful was coming for me.
‘Peter?’ it whispered.
I died. It knew my name. Was it God calling me?
‘Peter?’ it whispered again. ‘B'ist thee?’
My heart restarted. I drew a deep shuddering breath. ‘Daniel?’ I murmured.
‘Aye lad— 'tis Dan'l.’
‘Are you dead?’
‘Nay, Peter lad. Shine a bit o' light so's ol' Dan'l c'n see the steps.’
I switched on my torch. Daniel came up the steps, eased into the choir stalls, and sat beside me with a sigh.
‘What are you doing here, Daniel? I've never seen you in church before.’
‘Nay lad— the church bain't fer the loikes o' ol' Dan'l: all them fine folks in their fancy clothes. Better fer Dan'l when there bain't be nobody else around.’
‘You only come to church at night?’
‘Aye— at night.’
‘Aren't you afraid?’
‘Dan'l frighted? Frighted o' what, Peter lad?’
‘All those dead people in the graveyard.’
‘Dan'l bain't be frighted o' the dead. 'Ee be more frighted o' them wot's livin'. O' them wot'll turn 'im off'n the allotments an' outta 'is hut.’
‘Is that why you came to the church: to pray?’
‘Pray? Nay, Peter lad. Dan'l bain't be 'avin' the words. 'Ee don't rightly know 'ow to be a-prayin'.’
‘Why do you come to church then?’
‘Arrgh. It be roight peaceful in 'ere when there bain't be no other folks around. Ol' Dan'l c'n rake together 'is thinkin'— loike 'ee does the leaves, come autumn, afore they be burned up. An' loike when little lettuces come a-pokin' through the dirt.
‘An' there's that feller Jesus, wot they put up on the cross in the olden days. Arrgh— reckon as 'ow 'ee were worse off 'n ol' Dan'l.’
‘You think of all that, and then you feel better?’
‘Arrgh— reckon as 'ow we both be a-diggin' in the self-same patch.’
‘I reckon, Daniel.’
‘Didst come too ter rake up some leaves?’
‘Not exactly, Daniel— not exactly.’
I was temped to tell him about the bet and the money for our projected telephone call. But suppose we failed. It would be cruel to raise his hopes until we were more certain of success.
‘No need ter be a-tellin' ol' Dan'l. Heh, heh— loike my dad allus said: A seed is all secret 'till it shoots. Bain't it be so?’
‘Aye, Daniel— it be just so. Are you going home now?’
‘'Ome? Ol' Dan'l bain't roightly got no 'ome. Not now the allotments be a-goin'.’
‘Sorry, Daniel— I meant back to the lockup; or rather, your room above.’
‘Heh, heh— When Dan'l drinks a pint 'o beer, folks shake their 'eads, an' then tis one or t'other. Wicked ol' Dummy they say. Don't faze ol' Dan'l overmuch. Then them wot shakes their 'eads when 'ee sings a bit in The Street, they comes in 'ere an' they drinks some wine an' they sings their sober 'eads off. They be good, straight an' narrer folks they be. Heh, heh— That don't faze ol' Dan'l none neither.’
‘Daniel, I need to be getting back. If my aunt finds out I'm not in bed, I'll be for the lockup too.’
‘Heh, heh— Loike ol' Dan'l said: we both be a-diggin' in the self-same patch.’
‘Yes, except you don't have an aunt to keep you on the straight and narrow.’
‘Ye bain't be wrong tha: ol' Dan'l's got the whole village agin 'im 'cept thee an' thy friends.’
‘Like Molly an' Winnifred?’
‘Aye, an' the others in thy gang.’ 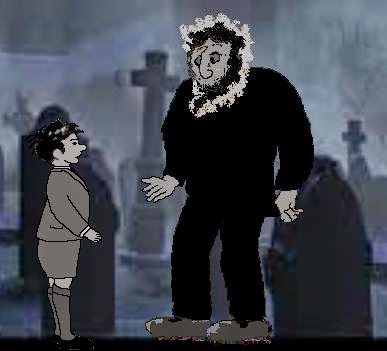 We moved towards the door. The church was calm and peaceful. The silver-black of the graveyard welcomed us. It was not in the least threatening. Why had I been so frightened before?

An extract from “Gang Petition” Chapter 11